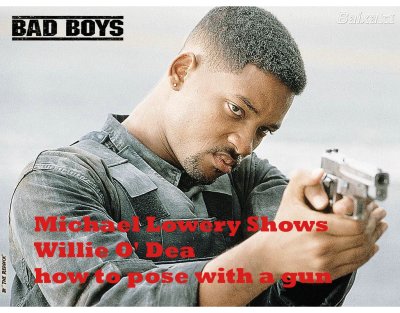 If corruption in Irish politics did not exist. Enda Kenny would not be the leader of Fine Gael. Instead they would have a leader with more organisation skills and not such a wooden persona. They would have one Michael Lowry and not the Mike Lowry Will Smith portrayed in the Bad Boys films. Even though he did not complete his Leaving Certificate he still was a superb organiser. He is from the South of the constituency near Holycross outside Thurles. One of his main achievements was to help the Tipperary GAA county board clear its massive debts. This was done with Feile a massive all-weekend concert in Thurles. The “trip to tipp” will be always be remembered foundly by many of a certain generation. Alas for Michael and for Fine Gael he was corrupt and didn’t pay his tax and was kicked out of the Fine Gael party. However that does not dent his standing in . The many schemes he helped setup like the Tipperary Institute Dunnes Stores Thurles ;) and the drainage scheme of flood prone the Mulchair river. Were of really benefit to the local community. He was elected on the first count in the 2002 election with 10,400 votes.

The other big political player in is former Minister Michael Smith. Based in Roscrea the Former Minister for Defence amongst other things. He was dropped from the Cabinet in 2004 as he was reaching retirement age and Bertie wanted to spruce the place up. Always been a solid government performer is finest hour of the last Dail was the clearing up of the Army deftness claims. After winning the Fianna Fail selection committee at the beginning of March he stated that if re-elected he would be interested in the job of Ceann Comhairle. He was elected on the 4th count with 8,526 1st preferences.

The other seating TD in the area is Maire Hoctor the only new Fianna Fail female elected to the Dail in 2002. When she took over the retired Michael Kennedy’s seat. She is based in Nenagh in the East of the Constituency. She was elected on the 3rd count with 8,949 votes.

Noel Coonan is the Fine Gael candidate and came fourth in the election with 6,108. And is currently a senator for Fine Gael. And is a member of the Cultural and Educational Panel

Kathleen O’Meara of Labour came fifth in the election in 2002 and is also a senator and sits on the agricultural panel. She was an RTE journalist. She is a triplet, and the identical twin of journalist, Aileen O'Meara. In 2005 she was involved in a controversy of using facilities of Dáil Éireann to hold meetings to promote Landmark Education. The Landmark Education is an organisation which the French Government has described as 'Cult like' and has been said by some people to brain wash people. Others dispute this. 2007 will be her third attempt at a seat. She got 5,537 votes last time.

The PD’s ran a candidate Bill Dwan in 2002 but are unlikely to do again.

Sinn Fein will probably run Cllr Seamie Morris of Nenagh who topped the poll in the Nenagh town council elections. He is most known for being against the councils plans to replace a plague on a town water spout that read "Erected by local contribution to commemorate the unparalleled benevolence of the English nation to the poor of at a season of extreme distress A.D 1822."

On a search of the Dail Database for speakers asking questions or making statements. since Mr Smith was no longer minister and thus not in the records for government business until June 2005 where the search engine stops for some reason. Michael Lowry appears 257 times, Maire Hoctor 10 times and Michael Smith 12 times This is basically the reason why Michael Lowery continually tops the poll in and will do again. He is the hardest worker.

So that leaves the next 2 seats. In the last election Maire Hoctor came second. However since then her star has fallen in the recent Fianna Fail nomination she just piped Former Mayor of , John Hogan thanks to transfers from Michael Smith. Considering she has much of the East of the constituency to herself which constitutes about half of the Fianna Fail cumman seems to show that she is not very popular. This I think will result in Michael Smith taking the second seat fairly comfortably by taking the lions share of the Fianna Fail vote.

So then we come down to the last seat. This is going to be some scrap between Maire Hoctor Noel Coonan and Kathleen O’Meara. I think Sinn Fein will take some votes but will not be in the final shake up. Maire easily out polled the other 2 last time around but as I said her star is falling. One incident that damaged her was the fallout of the Hanley Report in it was a call to shut Nenagh A+E. At a meeting where both FF TD’s attended Maire Hoctor speaking first towed the party line and stood by the report. Then Michael Smith stood up and denounce the report. Which the audience loved and put Deputy Hoctor in some hot water. While it might not in dear people to Mr Smith it certainly did damage to Deputy Hoctor. If the electorates general shift away from Fianna Fail maintains its self and Kathleen O’Meara and Seamie Morris attack here female, Nenagh and republican bases I will stick my neck out and say she will lose her seat. Fianna Fail may yet regret not finding a south of the constituency candidate a place where Michael Lowry alone exists and includes the large town of .

So then it brings it down to 2 Noel Coonan of Fine Gael and Kathleen O’Meara of Labour. Historically there has always been a strong Fine Gael and Labour vote in . Both candidates are quiet strong and will take alternative coalition votes of each other. Which may help Marie Hoctor slip in through the middle. Kathleen O’Meara’s controversy with the Landmark education may come back to haunt her. In the last general election Noel Coonan polled just under 600 more first preferences then her. While Michael Lowry gets a large personal vote much of it does come from traditional Fine Gael supporters. If he can attached some of those votes and second preferences he will be in a very strong position. It will all come down to the transfers. Kathleen O’Meara should be able to get much of the transfers from Nenagh based Sinn Fein and Maire Hoctor while Coonan might get Roscrea transfers from Michael Smith. This is going to be incredibly tight but I think Maire Hoctor’s loss could well be Kathleen O’Meara’s gain and see Labour take the seat.

Michael Lowery is still very loyal to Fine Gael. He still wants the rejoin the party. During the hung dail in 1997 when Michael Lowery could have used his Dail vote to put Bertie in power for some concessions he threw his weight behind the doomed Fine Gael coalition and again in 2002 he voted Fine Gael. So on the grand scheme of things in my opinion will return. Two for the coalition one for Fianna Fail.

While Smith should outpoll Hocter this time, my gut feeling is a growing disillusionment with Lowry leading to more traditional Fine Gael voters converting to Coonan. Further falls for O Meara, with a close race for third between Coonan and Hocter

Seamie Morris is a nice chap but running on a criminal ticket. Any vote for SF is a vote for criminals!!

Seamus and sf are brilliant and we the people of north tipp agree, only crime is the waste of space currently in office representing north tipperary

Maire Hoctor was an absolutely dreadful choice for North Tipp. She comes across as indecisive and ineffective. Hanly is not forgotten. She seems to have poor public presence , and is not very media-savvy. This will all stand to her disadvanbtage, and I'd be willing to bet that her first preferences are set to fall dramatically.
O'Meara has won herself a lot of publicity over Nenagh Hospital, definitely the most vocal candidate out there. I'd be very confident about her taking the third seat if it wasn't for, as the article said, the split vote between herself and Coonan. She was down 600 on Coonan last year but the hospital might bring her up.
As for Seamus the Shinner, he'll still be annoying the councillors in the courthouse next Autumn.

Smith keeping the seat warm for his son.
Hoctor talking out of both sides of her mouth and an abysmal record of 10 questions and statements in the Dail. Voting for the Hanly report to shut down the A&E in Nenagh.
O Meara with her "cult Like" persona and "landmark Education" Racket.
A Fine Gael candidate Mr Coonan who as an auctioneer would buy and sell you for a profit.
And of course our Poll Topping Icon of the Ministry of Integrity Mr Lowry
What a parcel of Rogues in a Nation.
How did things get so bad in North Tipperary. Is that all we have to offer.
A sad day for Tipperary that these are being "touted" as the only options for the 3 dail seats

Lowry carer wise is going no where, until he passes the torch on and finally frees up the FG vote in N. Tipperary the complection of the constituency will always be warped. Coonan is a hard worker but is an auctioneer, he is also very rough and unpolished. As for Smith, he is finished in terms of his parliamentary career. He has an incompetant, untalented son cut from the same cloth as he is however, I would hate to see the son take over, Smith has neglected Roscrea to the point where it has fallen behind all other towns in North Tipperary. There is an agreement between Hoctor & Smith that she will not enter Roscrea and he will keep out of Nenagh. Her base in Nenagh is sound due to the work load she gets through but publicity is a problem. As for O'Meara, there's no natural Labour seat in North Tipperary, her involvement in Nenagh is the involvement of a blow-in, her Hospital Campaign was made irrelevant when Hoctor threatened to ditch FF if Hanly came in. Hanly wasn;t brought in and the hospital is safe - who did that, Hoctor or O'Meara? I don't think Harney listens to the likes of Sen. O'Meara, she might, however have listened to Hoctor who was at least properly placed to exert pressure. With Smith neutered by age, ex-cabinet status and unseemly assumptions he will become Speaker, only Hoctor has any bit of pull. As for Seamie Morris, it's easy to be a member of a party that's all about problem ownership rather than resolution, nice guy but I'm not giving SF a chance of another seat from which to whinge in Dáil Éireann.