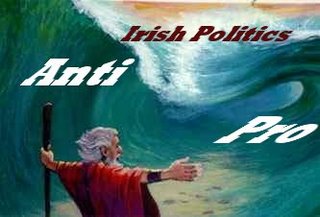 The one thing that Bush can do is divide people. In people tend to either love him or hate him. In we have the same figure. You would think that it would be either Ian Paisley or Gerry Adams. An anti-Irish man or an alleged “former” IRA chief of staff. But no Gerry Adams and Ian Paisley do not cause the same kind of passionate hate/love as one Michael McDowell.

It is funny people are rightly angry that McDowell referred to Richard Bruton as a Nazi yet do these people apply the same anger when people refer to McDowell as such. How many times do people refer to Herr McDowell. This is clearly a Nazi slur. I doubt these people are actually referring to him in the polite German form. In fact a google search for “Herr McDowell” produces 87,500. In fact this has been used by many of my fellow bloggers who I shall not name that are very angry at Richard Bruton been referred to a Nazi. So I have to ask this is latest anger against Michael McDowell against what he said or is in general a hatred of the man. To find out lets take a quick spin threw the history of McDowell hatred.

The real anti-McDowellism can about over the Citizenship referendum. At the time I have to say I was against it. In fact I am still against it. A kid born in this country is entitled to Irish citizenship. But to call it a racist referendum is wrong. was the only country in to do this. A lot of people want us to copy European models yet they don’t want us to adopt that one. Something has to be done we need tough but fair immigration laws. While I disagree with not granting Irish Citizenship I also see the need to stop people abusing the system. It is always tricky when dealing with immigration. So bring our laws inline with is probably not the worst thing to do. Also I don’t recall McDowell saying anything like “there is 122 million Nigerians you know”

The next big McDowell thing was his attack on Sinn Fein/IRA over the northern bank. Much of it has been vindicated with money been found in various places. I would say much of the money may have been destroyed once the Northern Bank changed its notes and rendered the bulk of the money useless. Part of his Anti Sinn Fein thing was his attack on the Daily Ireland newspaper. He basically called it a Sinn Fein propaganda newspaper and compared it to Völkischer Beobachter the Nazi propaganda paper. I note few gave out at McDowell doing this other then Sinn Fein supporters. Perhaps because it is as fair and objective as the Fianna Fail party newsletter is without possible connections to the IRA.

Then we had the next big clash with Michael. Over Olunkunle Eluhanla a Nigerian who was deported during his leaving cert year. There was a massive outcry plenty of Herr McDowell’s and he back down allowing him to return to finish his leaving. The reason he had been deported I am guessing was because he broke the law over some driving offence then early this year he was deported again because he had broken the law again. So McDowell was in the end right. But yet people gave out about this even when there was far more worthy cases in the country. I guess the length of anti-McDowellism is a Schwarzschild radius.

Then he had the café bars where he brought in legislation to fight the vintners lobby. By trying loosen the licensing laws to attempt to create a European type drinking scene and curb the excessive drinking culture we have. But is was defeated by Fianna Fail backbenchers who rowed in behind the publicans yet again proving the old joke Fianna Fail the Publican Party is far from the truth.

Then we had the Frank Connolly affair and the much debate that caused. In my opinion he was right in what he had done. Anyone who does not think that the head of an organization that is for investigating corruption in government, an organization that could bring down a government, can have links to an organization that wants to bring down the state and train FARC rebels in terrorist technology is a problem. Well they are not going to agree with me. When he was editor of the Sunday Business Post Pat Rabbitte called it the Continuity Business Post. Most people came out and gave out about McDowell giving Sam Smyth a Garda file when he in fact gave him a copy of a fake passport application which is a foreign affairs document. Then when Finian McGrath asked him a question he answered it and then came the acquisitions of abusing Dail privilege. This really must be the first time in Irish history that people have been given out to a politician for giving a straight answer.

Anyway sorry about that I probably should have given a less biased run down on McDowell’s time in office. But the thing is few people can give a straight analysis of McDowell and I did say it was a spin threw. Everyone has a strong opinion of him, some hate him others love him, some even fancy him. Turn on Vincent Browne of late and you can practically hear him dance a jig when talking about McDowell apologising so giddy was he with the excitement. Read the Herr McDowell blogs and Indymedia and strains of “Celebrate Good Times come on woohoo”(requires Real Player) waft over the keyboard.

But that is the nature of the man. He tells it as he see it. If every politician did that then we would be a lot better off. We wouldn’t have such PR sugar coated answers that leave us wondering what the f**k do these parties stand for. We must be the only country in where the biggest party has no ideology. If Dev hadn’t called them “The Republican Party” they wouldn’t know where they stood on that either. But that will never happen we don’t want it to happen we like are political debates sending drunks and insomniacs to sleep and devoid of passion. That way we can bitch way about “that shower in the Dail” all day long and still go out and vote the way our parents did.

No, but Ivana Bacik has gone on record saying that McDowell told her his reasoning for the referendum was to get the Nigerians out. A lot of the criticism of McDowell is hysterical and un-necessary but his statements to Ivana Bacik were unacceptable.

interesting never heard that one. the only google source i can find of it is a comment in Indy media claiming that it wasa in village but I take your word it was.

But funny he would say that to her.
Considering she is probably on the opposite side of most things to him. But I have little time for her and her anti-men stance and the way she looks down on people who believe in god. And considers anyone who disagrees with her backward.

But if he did say it and not in jest then it is unacceptable as is his nazi jibe. But so was Pat Rabbitee's which he said in a interview with the paper of record

I don't really have an opinion on her but I'd be inclined to believe the statement, seeing as she's a law professor and knows the implications of libel and slander. It would be really terrible to make something like that up.

True but it would not surprise me if he said it to get a rise out of her.

Not denining he said it but it is a bit like Gerry Adams confinding with Ian Paisley if you get me.

I think your assessment of Michael McDowell adds a useful counterpoint to the lazy analysis that McDowell = Facist. Your assessment of bloggers in glass houses throwing "Herr McDowell" around is well made. That said, I believe that much of McDowell's actions (including his tantrums) are contrived and he shows all the classic signs of a bully. An intelligent bully perhaps, but still a bully.

He's not that intelligent. If he was, he wouldn't keep losing his cool and making a fool of himself. I'm told he's also known to round on people in social conversation when they say something which displeases him, which makes him seem like a bully as well as just a clown.
Also, his comment about Bruton made no sense. Geobbels was a propagandist, so calling Bruton "the Goebbels of Propaganda" is like calling him the "George Best of Football" or the "Rolls Royce of Cars". Sarcasm is the lowest form of wit, and he can't even get that right.

Simon, your describing Ivana Bacik as "anti-man" is ridiculous. She's not. I'm sure her partner would agree!

Frequently I have heard her decry the lack of compassion for single fathers, for example.

Also, if she's so anti-man, why did a lot of men spend time working on her Euro campaign?

(Full disclosure - I was one of those).

Also, while I'm at it, Ivana Bacik might be an atheist, but she does not, as far as I have ever seen or heard, look down on people who believe in God, nor does she consider anyone who disagrees with her backward.

Fair enough Tom you probably know better then I do on that issue. It is just the impression I get from what I have seen of her. But I withdraw that.