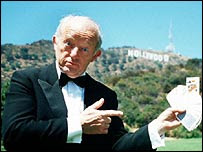 Government is not a magic show you have to show the people how you do your thing. But it does seem that the Bertie and Co have a Paul Daniels’s fixation determined not to show us how it is done. A new study by Thinktank for Social Change there has been a marked increase in public bodies in recent years. From the Sunday Independent

We are now cared for by almost 500 public bodies - a 600 per cent increase compared to 1970. The report, Outsourcing Government: Public Bodies and Accountability, finds that government bodies, "have grown significantly over the last 40 years and very markedly in the last 10 years."

Now I will leave the fact that this is showing signs of the growth of big government to the more pro-small government bloggers. But what struck me the most was the lack of accountability the report highlighted in these organizations have.From the report

There is something in the region of 5,000 appointments to Public Bodies at national level alone, the majority in the gift of Government. Given the number of these appointments and the importance of the function which the appointees must perform, it is a big gap in our accountability structure that Ireland has no clearly established mechanism to ensure that appointments are free from undue political or other influence or that there is an effective independent appointments system in place. As of now, ministers and senior civil servants are responsible for appointing the majority of members to Public Bodies. Moreover, the influence of the Oireachtas in the making of these public appointments is negligible.

You would think that in 2006 the nod and wink philosophy around government would have gone but alas it seems it has not.

It is not only in appointments that the government not been opaque. The Freedom of Information act was brought in 1997 and it was amended in 2003. The amendment in 2003 reduced the scope of the act and limited the amount of information that the public can get. The government is acting in our name and we do not know what they are doing. Prior to its amendment the Freedom of information act exposed "details of the Government’s controversial deal with the religious orders on compensation for abuse victims. " Who knows what is been hidden in its current form? I guess all we can do is wait for Bertie the Magnificent to do a little misdirection seeing a giveaway budget and missing the latest scandal. Then watch as he goes alakazam and pulls the election out of the hat.