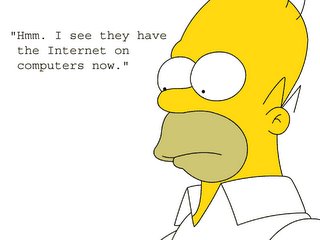 My favourite ever episode is A Fish Called Selma (the one where Selma marries Troy McClure). There are two many quotes I like - the one where Troy fantasises out loud about what it would be like to be famous again - "Not just the McBain movie, but maybe my own fragrance: Smellin' of Troy" - but it's worth it alone for the Stop The Planet of the Apes and the Dr. Zauis song "I hate every ape I see from From chimpan-a to chimpan-zee/No you'll never make a monkey out of me"
I never get sick of it...

Or the one in space . the eating crisp to the the blue danube. classic

I do believe alot of the episodes you mentioned were from the Conan O'Brien era. I know he was there for the college episode and also the monorail one.

I like the one where Homer becomes leader of the vigilante group in reaction to the cat burglar and also the one where he becomes Union President.

is a nice line,
but i relaly liked the line from chief wigmam. when bart palyed the practical joke on homer and the beer can exploided.