I for too long went through a phase of being unable to admit I hadn’t seen a classic or well known movie that surely anyone who claimed they were a fan of movies should have seen. The thing was my movie collection, that is, my now defunct collection of movies taped onto VCR, began slowly. The whole practice began with a friend, T.J. Begley, loaning me The Silence of the Lambs in secondary school after he discovered I had never seen the movie. There was a sense of great discovery and almost fear of the unknown with this movie before I ever pressed play to follow Jodie Foster on her morning jog, The false reveal before the pitch black shoot out is one of the great constructs and smarter than anything Tarantino or Shyamalan has sought to dazzle us with. All the pity the Lecter character has descended into the ranks of caricatured villains. A random bit of trivia I carry around is that ’Lambs’. ’One Flew Over the Cuckoos Nest’ and ’It Happened One Night’ are the only three movies to ever take home the big five on Oscar night - Best Film, Actor, Actress, Screenplay and Director.

4. 'Eternal Sunshine of the Spotless Mind'

Charlie Kauffman has already of course been mentioned in the list. 'Eternal Sunshine' deserves a mention, and this high ranking, for being so real to life despite the unique story of a couple seeking to remove memories of a relationship from their minds. Our memories are such strange filters of events, we hang on to events in such an onconsistent style, happy memories enshrined, the darker moments relegated to the back of our mind yet somehow still impacting on our personalities. Love and the people we love effect us like no other, the importance of and lessons we take from relationships can hurt us and inspire us in equal measures. 'Eternal Sunshine' captures this in the most impressive way, using an intelligent, funny and bitterly sad story, with Jim Carrey and Kate Winslet delivering performances that make you want to be in love.

Taking an original idea, a source novel or article, or re-working a poor script, creating characters and dialogue that can enter an audiences consciousness , building the ideas and providing the basis for the images to follow is an underappreciated and pivotal element to every film mentioned on this list. The writer deserves our respect. Talents that come to mind must include the afore mentioned Woody Allen. So too Billy Wilder’s work on movies like ‘Double Indemnity’ and ‘Some Like it Hot’ is the stuff of greatness. Wilder is of course a hero of Cameron Crowe, a great writer in his own right in work such as ’Almost Famous’ and ’Jerry Maguire’. David Mamet has filled work like ’Glengarry Glenross’, ‘Wag the Dog’ and a personal favourite ‘State and Main’ with sharp and layered dialogue. Associated more with his work on TV, Joss Whedon has done untold wonders with movie scripts. Uncredited for re-writing the script for ‘Speed’, Oscar nominated for bringing us the revolutionary script for ‘Toy Story’ and his work on films like ‘X-Men’ and ‘Alien: Resurrection’ has been infamously butchered. ‘Serenity’ of course hardly needs mentioning as the greatest example of the eclectic mix he brings to any story.

Everyday, we create versions of ourselves that we feel will ingratiate ourselves more to the world around us but we often end up more isolated. How much much more of a symbol of this is the 3 versions of himself Clark Kent has to inhabit every day. The Christopher Reeve Superman movies are a mixed bag but there is a perfect nostalgic charm that enshrines the first in the canon in my memory. The scene perfectly epitomising this is Superman’s first appearance in Metrpolis, flying to save Lois Lane and a helicopter toppling from the roof of the Daily Planet. He catches Lois, reassuring her he has her only for Lane to squeal back ’You’ve got me, who’s got you?’. There is no other movie I return to more often. No amount of cynical misunderstanding that Superman is subject to can take from the great nobility of the character and his decision to do good with such immense power. 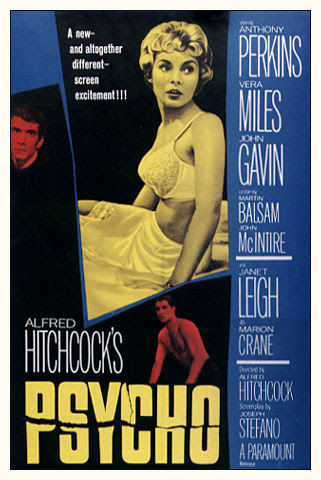 I first saw Psycho on a Friday night, introduced by a guy called Brian Reddin as part of a classic movie slot 'The Last Picture Show', shown after the Late Late Show on RTE 1. My father beside me asleep on the couch, I sat riveted to this story of a woman who makes a stop at a motel, the fact that she was on the run with money stolen from her employer soon became your last concern. One of the most discussed and respected of film makers, Hitchcock as a personality and the demands he placed on his actors, particularly the actresses at the centre of his stories, are stuff of cinematic legend. With 'Psycho' the stand out moment is of course the shower scene. What struck me though is a simple shot of the heroines sister, Lilah Crane walking up the hill to the Bate house unaware of the horror toc come and then the final scene of Norman Bates revealing his inner thoughts kept me awake that night and single handedly made me realise the power of film. 'Psycho' is my No. 1 because I see it as the first film I ever really saw, appreciating every shot, with the red herrings and lack of convention that Hitchcock brought to his films gripping me jut as much as they did audiences 30 years ago. A masterpiece.

Great list CK. I can admit to not having seen a numbe rof your entries but will endeavour to do so in the coming months.
One that didn't make your list but that I can never turn away from is the Shawshank Redemption. I watch that and feel the same way as you described Superman.

hey, bit of an odd one but my name is T.J. Begley (lending silence of lambs above) and I'm just wondering if it's me above and if I know you. did the usual "Google my name" thing and found this. you're about the right age to have been in school with me but don't remember lending silence of lambs to anyone, though it probably was in my video collection. can't be too many 25yr old blokes called T.J. Begley in Ireland. did you go to colman's? decent list by the way.

T.J. How are things?, I did indeed go to Colman's. Its a small world, though not really with the mighty Google I suppose! Anyway send an email to 'ck@thedossingtimes.com' and I'll reply, prefer to keep my anomynity here.