There is so much to praise in such a quick remark, taking a bog standard reply and having the audience in on the joke so as to appreciate all the more the great wit and classic delivery from Bill Murray. It just encapsulates this whole film for me. The simple undemanding story of this film means we don’t think to appreciate the great work each of the supporting characters put in re-creating scenes immaculately. Creating humour is commendable enough, creating it and maintaining it the repeated events of one day is stellar.

Admittedly this is kinda cheating but there are 25 choices so I am stickking to my theme: The train explosion in ‘Broken Arrow’/the explosion at the beginning of ‘Sword Fish’/the destruction the White House in ‘Independence Day’/the slo-mo bullets of the Matrix Trilogy/the helicopter-train sequence in Mission Impossible/the shoot outs in ’The Killer’/the Alien - Ripley showdown in ’Aliens’/the ’magazine’ fight in ’The Bourne Identity’/the Thames boat race in ’The World is Not Enough’ /the destruction of the Death Star in ’Star Wars’/the hotel room escape in ’Once Upon a Time in Mexico’/Keanu Reeves and Sandra Bullocks escape from the bus in ’Speed’ /The Naktomi Tower climax in ‘Die Hard‘/The fulcrum jump in Mission Impossible III/The steam train driving the Delorean in ‘Back to the Future III‘/The chariot race in ‘Ben Hur’/The cliff jump in ‘Butch Cassidy and the Sundance Kid’/The final shoot out in ‘Bonnie and Clyde’/Brad Pitt and Angelina Jolie go at it in ‘Mr. and Mrs. Smith’/The barb wire bike jump in ‘The Great Escape’/Harold Lloyd hangs from a clock face in ‘Safety Last’/The ‘French Connection’ car chase,/The shoot out in ‘High Noon’/Bruce Lee takes on rival students in ‘Fists of Fury’/The Terminator (Robert Patrick) reforms from molten metal.

If I am to pick an actor, who’s career I envision evolving as my interest in movies did and who epitomises nobility and respect for his trade, in the same vein as Gary Cooper or Spencer Tracy it has to be Russell Crowe. His performance in ‘The Insider’ is one of the greatest I have ever seen and the greatest example I have known of an actor being engrossed in a role. ’Gladiator’, ’Cinderella Man’ and Curtis Hanson’s magnum opus, ’L.A. Confidential’ are each the richer for the credibility Crowe lends to any role. Personal lives, filtered through the sensationalist thesaurus of the press, will never factor into how I view a truly talented actor. For all the stories of Brando, Dean, Burton and Harris living their lives to the full there is no denying the respectability they brought to their trade. I will make my assessment of an actor based on what I see on screen. Of the other classic question of the great actors, that is, De Niro or Pacino?, I always answer - Nicholson. 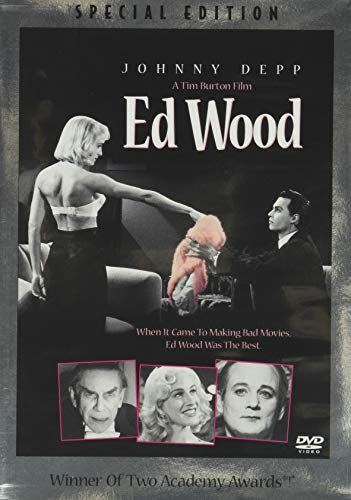 Johnny Depp and Tim Burton are a magic pairing. To take a premise of telling the story of a man decried as the world’s worst director, shot in black and white, depicting a world of eccentricity and bizarre creation, is a sign of genius and I would class ‘Ed Wood’ as a modern master piece. The film is made all the better by being a true biographical tale and is laced with humour I struggle to encapsulate but know I enjoy. Words like visionary, character actor and artists can be used without any sense of grandiose in the context of these men. Martin Landau‘s portrayal of Bela Lugosi, a man desperately grasping at past glories is a stand-out. ‘Sleepy Hollow’, a lesser film deserves mention also, for being one of the most beautifully stylised films ever put on the screen, and Ichabod Crane’s constant fainting is one of my favourite running jokes. Speaking in the same breath as Martin Landau’s performance I feel here is apt to mention Willem Dafoe as Max Schrek in the eerie ’Shadow of the Vampire’.

11. 'The Lord of the Rings’ experience

I travelled with Tuathal around New Zealand and Australia last year. Tuathal gladly gives up as much time as I do to watching and enjoying movies and I am always greatful to him for that. In New Zealand, and particularly Wellington, hometown to Lord of the Rings director Peter Jackson, we got a great sense of the importance of these movies to the Kiwi nation. Over 23, 000 Kiwis were employed directly in the production of these movies, and their success meant film making surpassed agriculture as the No. 1 industry in New Zealand. Touring the country, little of its beautiful landscape had not been used to great effect in creating the world of the films. Importantly the public and private grounds are now in beter condition than they were previously to having caught the locations scouts eyes. Tours, cataloguing the history of the film and the locations of numerous scenes, were available at many stops. One of our tour guides wasted little time in providing a picture of him donned all in necessary layers of magic for his role as an extra in one the films, praising Jackson for the consistent employment he gave to many struggling actors. I loved this level of interaction with a momentous film series and have cheesy pictures of walking through gardens with a staff as Christopher Lee and Ian McKellen did at one point during filming to prove such interaction. The Lord of the Rings were the last movies I feel that marked a benchmark in film, I have my reservations about the untethered praise they have thrown at them, but I cannot deny they greater respect I have for these movies now knowing the scale and investment of talent involved.