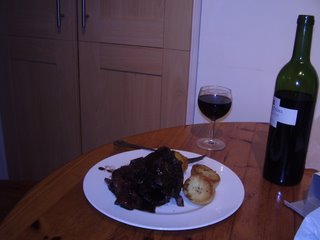 I haven't done a food post in about 2 weeks so I thought I would put one now. Tonight I am eating Pissed Pigeon with Roast Potatoes. With Ice Cream Ireland's Baileys Brownies with Irish Coffee with Whiskey Ice Cream. As you can see from the picture I can't present food to save my life but trust me it is good.

I will do this backwards first with the Baileys Brownies basically the same recipe except as I have no Vanilla so I subbed in 2 table spoons of flacked coconut instead. Basically this is going to do me for a packed lunch for a few days (Still a student at heart) and keep my housemates from giving out to me for not cleaning the house much. But also it will do for my desert tonight. Which is going to be brownies with a few scoops of Irish Coffee with Whiskey ( I know) Ice Cream. The Brand of Ice Cream is Simply Ice Cream Homemade ice cream that I picked up in my local farmers market from a nice girl who asked me was Irish Coffee Coffee with whiskey. (I am not in Ireland so could not pick Murphy's Ice Cream).

Also I don't have a weighing scales so I used a yoghurt carton instead. Here is the conversion of what one yoghurt carton equals. From the Limerick Monetary advice agency


The verdict on the Baileys Brownies with Irish Coffee ice cream is well as a friend of mine would put it. Sexual Brownies

Now for my main course. Piss Pigeon. You need 1 Pigeon

First Preheat the oven to 180c

Peal and halve some potatoes, Place in a pot of water and bring to the boil. Boil for 5-10 minutes. Strain out the water from the pot. And rough the spuds up a bit. Put a few dolps of duck fat in a roasting tin and put into the heated oven. About 2 minutes later take the tin out. And bast the spuds in the duck fat. And put them into the oven


Next in a frying pan melt some butter. Once melted throw on the pigeon and brown the bird. Once browned but in the oven on the roasting tin.

I am not sure how long the bird should take but about 30 minutes. Keep checking it and waiting until the juices run clear. (i.e. keep poking it with a knife until the blood is no longer red.

Once this is done and the spuds are roasted.

I have to say it was very yum. The sauce especially was yum. Whiskey is their nothing you can't do?

Good god. That all sounds amazing.

Yeah Simon that sounds dam tasty and great title as well, the mark of a genuine cook.

You can't go to wrong with booze in food! So glad it worked out well.