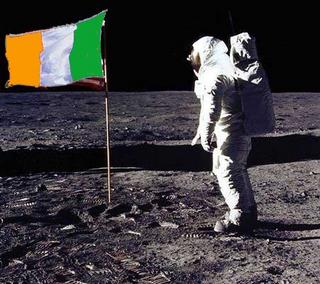 With China now sending men into space is it time for Europe to do the same? In Europe we have the European Space Agency (ESA) which includes Ireland. In China the missions have come a symbol of great national pride leading to patriotic demonstrations and a coming together of its people. Also it has enhanced China’s world wide reputation. This coming together is what the EU would love to see its citizens doing. In Europe there is not a real sense of what it is to be European something the EU would like to change. Something like a manned mission to space might change this.

But what is the state of the ESA at the moment. The Venus Express which will be soon be launched from Kazakhstan will reach the planet Venus in April 2006. It is the same basic design as the 2003 Mars Express mission and cost €220m. (With €150 million PPRAS scandal maybe we could send an Irish Mission to Venus.) The aim is to study the greenhouse effect that makes Venus the warmest planet in the solar system. www.esa.int Also other mission such as the joint operation with Japan Bepi Colombo to study Mercury in 2012 are in the pipeline.

Galileo is one of the key missions that ESA has planed which has seriously annoyed the USA as it is an alternative to the GPS system. Where the US restricts the accuracy of the system for non-military people Galileo will not have such limitations which the US military use.

In a recent meeting of scientists in Paris scientist discussed what should be the main trust of European space missions between 2015-2025. The main ideas were to test for Gravitational waves, study Bose condensates quantum entanglement and the Darwin mission to look for Earth-like exoplanets and to increase the use of Landers rather then orbiters. Now for the people who read this and don’t know what a Bose condensate are it doesn’t involve humans in space. The only project that seems to have any possible human missions involved is the Aurora programme. This is a 30 year project to send robots to Mars and it is touted to eventually lead to manned missions. But manned missions are not universally supported. Martin Ward of Leicester University chair of the UK’s Particle Physics and Astronomy Research Council does not believe that the UK should help fund manned missions.(physics world October 2004) The UK is one of the main contributors in both money and expertise to the ESA so without the UK contributing manned European missions may not happen.

Money is one of the main factors that will limit a potential manned space mission. The EU spends 40% of its budget on 5% of its population through agriculture. If some of this was diverted to science and to the ESA this could finance a space manned mission and create jobs. But I doubt the EU has the political will or cross national support to do this.

Currently funding for the ESA mainly comes from 2 sources Government and commercial. A lot of this from satellite launching using Arianne Rockets launched from French Guinea. As they are launched nearer to the equator then American or Russian they use less fuel to get into orbit. Thus allowing the ESA to undercut NASA and the Russian space agency. This has made the ESA a major player in the satellite launch market.

But the question is would it be of any use. Research in space is vital however with the International space station which is partial funded by the ESA (and therefore Ireland) and with the Shuttle and Soyez crafts an European manned space vehicle would be money and expertise diverted away from more worthy projects. Manned space missions to planets don’t achieve much that robotic missions don’t. The comparative cost does not merit landings from a scientific point of view. The advantage comes from the technology developed and the knowledge and expertise gained in the building. All knowledge gained is an advantage and Europe and especially Ireland needs to increase its money in scientific research. The government in Ireland complained recently about not having a top world university in Ireland and yet they are unwilling to put in the funding that is required to produce top quality research. Cutting edge science that leads to world recognition requires lots of money. So with the EU spending on science not sufficient at present diversion of these funds to manned missions will take away from other research and lead to Europe going backward scientifically. It may lead to more European unity with people being proud to have a European manned programme. But that is not the reason for having an European Space Agency. The reason is for scientific advancement and basically a manned space mission would be a glorified EU publicity stunt. The only truly positive aspect to it would be that it would encourage young people to study science and surly there are cheaper was of doing that then a multibillion Euro programme.

You left out the ESA's Automated transfer Vehicle (ATV) as well. The first one the Jules Verne is to launch next year. It will be the supply vehicle for the ISS.