Do go See 'I am Legend' - every movie deserves a subjective appreciation though don't expect the intelligent blockbuster you may have been lead to expect by the astronomical performance of the movie in the States. Some of the poorest CGI I have seen in quiet a while and ultimately a lacklustre impact to the film left me dissatisfied. A highlight though is a movie poster worth keeping an eye out for as Will Smith walks though a deserted, grass strewn Time Square - the Superman and Batman logo meshed, suggesting a point in the future where the oft suggested Superman v Batman movie becomes a reality. I know who I think would win, the Man of Steel could possibly take out the Dark Knight with his pinky. Nevertheless, Empire brings bad news today with the suggestion that Brandon Routh may not return as Superman and also suggests a sequel may not be even be made to 'Superman Returns'. Sad news indeed. This shot however is a nice touch. 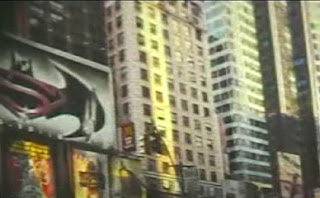 they did seem purposefully blatant about that superman/batman poster

What If with Batman's intelligence, he figured out that cryptonite is he's weakness and just made a suit laced with it. Who would win then? Also I thought the use of the ground zero thing and it now being based in NYC gives similarities to the darkseekers being of terrorist origin, likening of whats happening in the world today. or is that just too off the wall?

Batman would kick supermans ass. AS he has done in the comics. on a few occasions