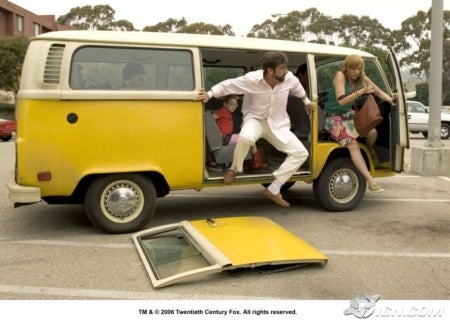 Little Miss Sunshine is the dark horse of the Oscar race. Along with Ryan Gosling’s nomination for Best Actor, its nomination for Best Picture has had a crest of eyebrows furling across the entertainment world. Equally, its won Best Picture at the Producers Guild Awards and Screen Actors Guild Awards, wins not to be disregarded as it is ultimately the members of these Guilds who will vote for Best Picture. So wherein lies the appeal of this film in a field numbered by recreations of historic events (‘The Queen’, ‘Letters from Iwo Jima’), epic mood setters (‘Babel’) and stellar thrillers (‘The Departed’).

Put simply, ‘Little Miss Sunshine’ is a refreshing, feel good movie. This is despite the dysfunction and range of difficult topics on screen. Our instinctive description of ‘Little Miss’ is that it is a comedy. It could almost be described as a big screen sitcom, in the spirit of movies such as ‘Groundhog Day’ and ‘The Apartment’ using humour to cushion underlying sadness. Comedy, however, quick to be disregarded or ever get any type of awards recognition is I think the hardest medium to succeed in. It is subjective, entirely a matter of taste and can fall horrendously flat as any stand-up comedian, screen writer or actor can testify.

That is the great achievement of this film. Being pitched to a producer somewhere in Hollywood a few years ago I can only imagine some hybrid term being devised to convey the mix of emotions and themes on display throughout the film. Joss Whedon, the writer of such gems as ‘Toy Story’ and creator of ‘Buffy’, ‘Angel’ and ‘Serenity’ always chooses comedic actors to play supporting roles, firmly believing that having mastered the delivery of a comedic punch-line they are more than equipped to add layers of substance to what would otherwise be forgettable characters. Whedon has yet to put together a bad ensemble of players so I feel, is on to something. In the same vein in ‘Little Miss’ Steve Carrell ably establishes himself as a credible actor, biting and acerbic, convincingly playing moments of comedy, portraying detachment and depths of despair and all the while appealing to the audience. Will Ferrell should take notice. Carrell is on screen with actors that could never be pigeon holed or associated with one role and in making diverse role choices he too is building up a fine body of work. So, beginning with a dinner table scene, which handles exposition and propelling the story in effortless strokes, the story addresses the complexities and hopes of a rich ensemble throwing them into dilemmas and conflicts. The running time is rippled with moments for reflection, laugh out loud humour, tragedy and farce.

Maybe within this wide-net of humour lies the secret to how it has registered with so many. Thankfully this does not dilute the impact of the film or mean any jokes are held back on, which for the bulk of the running time is a good thing. One blemish though, a decision made by the adults in the situation half way through the film which certainly could be justified within their objectives grates a little and I felt didn’t sit well with the rhythm of the film. To its credit, so good is the remainder of the film (and I cannot recall such other strong examples of this), the film re-emerges unscathed.

Consider Alan Arkin’s gems of scenes. They serve as an apt cross section of the films medly style. I’ve been frustrated with the need to lable each of the characters, his being the ‘porn-obsessed grandfather’. In querying his grandsons love-life, quelling his grandaughter’s doubts and keeping secrets he plays an introvert, extrovert, sage experienced man that should just be relished, not relegated to a character type. His character is real, multi-layered and indefinable, like any of us watching. Such attention is given to each of the characters even in making some, particularly Greg Kinnear’s, very unlikeable at times

So too the story is constructed to give time to resolving each character’s arc, this does not necessarily involve story book answers and a sealed envelope of resolution. The title refers to a beauty pageant, an end point of the family’s road trip and its crown, the dream of daughter Olive. An important final stage performance towards the end is an almighty fine scene, fun and uplifting and offers plausible hints of each finding some comfort in their own skin and waking up to some hope